You are here: Home1 / Press

Listening live to Nikolai Demidenko is an experience. His portentous elegance as a musician merges with a stunning sound of symphonic roots. I was able to check it live with a Second Brahms Concert of those who leave their mark. In fact, Demidenko himself insists on speaking of sound and color when referring to Beethoven: “he did not write for the instruments of his time, but for much more sophisticated pianos, with great force and many colors, such as the Steinway, Bechstein or Fazioli…” Read full interview (in Spanish)

Nikolai Demidenko scarcely needs any introduction as he has extensive worldwide recognition and critical acclaim. His passionate, virtuosic performances and musical individuality have marked him as one of the most extraordinary pianists of our time… Read full review.

“The Russian pianist Nikolai Demidenko was a brilliant interpreter for Scriabin’s emotional piano concerto. He offered many gradations between powerful, downright steel chords and filigree delicate, glittering drive, could seductively create lovely moods as well as power-driven outbursts. He has a surprising virtuosity in piano technique, but he does not produce it vainly anywhere but places it at the service of the musical statement.” Read full review (in German).

Demidenko’s previous visits have been red-letter days in Melbourne’s serious music calendar, the most memorable being his solo recitals which have offered a heady mixture of technical bravura and emotional poise. Certain readings of Rachmaninov, for example, remain lodged in the memory as ideals of interpretation, some of the Preludes comparable with legendary recordings but enjoying extra impact in a live-performance format. Read full review.

Whirling figurations to make the head spin by Michael Church

“…Exploiting all the colours latent in his Fazioli (the Bentley of the piano world), he banished all thoughts of the harpsichord for which these little masterpieces were written, and created instead a canvas which was almost symphonic. On that the paint was lovingly applied: swooningly smooth legatos, staccato outbursts to make you jump, whirling figurations to make the head spin, all delivered with extreme precision. Every bar of this first half of his recital was riveting…” Read full review.

Demidenko, Symphony Silicon Valley give Scriabin his overdue place in the musical pantheon by Elijah Ho

The strings breathed life into this heavenly music, and Demidenko followed them with some of the most arresting sixteenth-note passages I’ve ever heard. Before I knew it, my eyes were moist. I could not believe this gift of Scriabin, 120 years old, was still relatively unknown. The Allegro moderato, on the other hand, was a force of nature, as Demidenko scaled the most breathtaking artistic heights, replete with sweeping arpeggios — and the kitchen sink.

The orchestra responded magnificently to Tchivzhel all night, as he offered a grand sense of proportion in Rachmaninoff’s Second Symphony. From the opening Largo, thick, weeping textures were shaped with aristocratic elegance, and attractive melodies were supported beautifully by the harmony. Tchivzhel communicated the way Rachmaninoff composed: building toward a central climax and overwhelming the listener with emotion…” Read full review.

“Russian pianist Nikolai Demidenko was superb in a much anticipated recital that gave a contemporary account of Chopin interpretation filled with spontaneity, personality and moments of rare brilliance…

Demidenko’s eloquent opening bracket interspersed the waltz and mazurka with clear exposition of the essential wit and charm of these beguiling dance forms. He breathes life into Chopin’s degrees of freedom, unexpected little tricks and mercurial changes of mood…” Read full review.

“…Nikolai Demidenko performed a version of Prokofiev’s Concerto Nr.2 that should be considered as reference, from the beginning the sound of the notes from the piano came out like bright pearls on top of the bright velvet ropes of the strings of the orchestra. Then came all the high difficulty and powerful sound full of control, in the peculiar development that Prokofiev wrote for the first movement.

It is a huge cadenza not only for its duration: the brilliant arpeggios, the crossing of hands and other elements of brilliance that Prokofiev wrote on his own honor and glory were resolved with impeccable technique and profound musicality by Demidenko. Then, the playful irony of the Scherzo, the mock solemnity of the intermezzo and its virtuosic elements – those electrifying glissandi of the right hand with his left hand arpeggios- and the dense and growing intensity of the final Allegro tempestuoso, rounded a version of reference that will remain in the memory of the audience of A Coruña for a long time…” Read full review (in Spanish).

Nikolai Demidenko, a seigneur in Paris

“The Parc de Bagatelle’s Chopin Festival opened on 16 June 2012 with one of those concerts that remain engraved in one’s memory: a seigneur of the piano came by to play in the all-too-small Orangerie. Even from his youth, Nikolai Demidenko (born on 1 July 1955) has occupied a place all his own in the prestigious Russian school. Every musical implication, guided by mature thought, has led him to blend into his playing the fruits of new experiences stemming either from the broadening of his repertoire or from confronting instrumental aspects of piano design. Whether turning to unfamiliar 18th‐century musical scores or contemporary music, there is not even a reputedly minor piece that does not reveal an unexpected spark of genius under his touch…” Read full review.

“…The Russian pianist Nikolai Demidenko invited us to a Schubertiad of his own. This consisted of works culled from the composer’s last year, when, knowing how cruelly his days were numbered, he was beset by headaches and fits of giddiness: this Schubertiad was necessarily a grave affair … his tone had a singing warmth, and his pace was gentle: the long sustained lines and the shifts between minor and major were brought out with ballade-like grace. The runs and scales of the second piece were so pearlised and swift that they went like the wind; the third – the rippling one everybody knows, even if they don’t know it’s by Schubert – and the arpeggiated fourth came and went in an exquisite blur. These are not virtuoso pieces, but they benefited enormously from Demidenko’s discreet virtuosity…” Read full review. 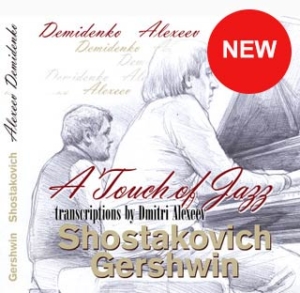 If you can listen to it, you can do it in Spotify.